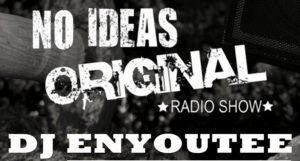 Join DJ Enyoutee and Zagnif Nori as they bring you the dopest underground joints you’ll here anywhere along with exclusive interviews from both hip-hop legends and dope new talent.

Middletown, New York native DJ Enyoutee started listening and collecting hip-hop at the age of 7. in 1990, after being inspired by a local DJ named DJ Guess, he decided to try his hand, at a time when the best hip-hop was mostly only available on vinyl.

In the early 2000’s, Enyoutee began sharing his mixtapes locally and started promoting his volume series on cd on a wider basis. After a hiatus, he resumed his craft in 2009, going on to win local DJ of the year in 2010 & 2011.

Enyoutee’s local success landed him a slot on local powerhouse station WVKR in Poughkeepsie NY and in June 2011, the No Ideas Radio Show was launched. Since the start, the show has had over 450 special guests, from upcoming talent to hip-hop legends. As of January 2018, Enyoutee’s show has also been broadcasting on WRAP.fm. In addition to his show, DJ Enyoutee also curates “DJ Enyoutee Presents” projects showcasing some of his favorite producers and emcees.

Pawz One & DJ Dister - Out Of Bounds (Official Music Video)

CHECK OUT THE REST...

Choppin it up with Willie the Kid Pt 1

Choppin it up with Willie the Kid pt 2

Choppin it up with Illa Ghee pt 1

Choppin it up with RIGZ pt 1

Choppin it up wit RIGZ pt 2

Choppin it up with Billy Danze of M.O.P.

CHECK OUT THE REST HERE...